“It’s OK, right grandpa? It’s OK,” he said as tears welled up in his eyes. My five-year-old grandson was looking to me for confirmation that his crash was not a “bad one.” It was his second fall. I was beginning to worry he would either hurt himself badly or lose the nerve to keep trying.

Earlier on Sunday afternoon, my grandson called me up and pleaded for me to help him ride his bike. I had wanted to try and teach him months ago, but he had no interest in learning. That all changed when he went to the park earlier in the day and became enchanted while watching several young children riding their bikes along a meandering path. He now wanted to ride! 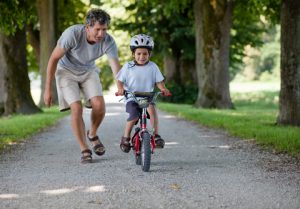 I showed him how to take his foot off the pedal on the side he was tipping towards and place it on the ground away from the bike, keeping the bike from tipping all the way over. After practicing the maneuver several times, tipping back and forth from side to side, he discovered how easy it was to keep the bike from crashing to the ground. He now had the confidence he needed to resume learning how to ride his bike without the fear of getting hurt.

Staying on the path

He did really well in the wide open parking lot of the vacant park I had taken him to. With all the open space he could pretty much let the bike go where it wanted, taking him along for the ride. The next hurdle came when we moved our practice onto one of the narrow paths running through the park. Invariably he would begin to veer to one direction or the other and have to put down a foot to keep from running off the path. I speculated that the problem was possibly due to his tunnel vision. He kept his eyes glued to the front tire and the pavement rushing below. I asked him to try to look up, but his eyes would quickly gravitate back to the front tire and the ground beneath it.

One of the greatest benefits [of process simulation] can actually be the confidence gained through a well-built simulation.

Up until this point in the training process, I had been running behind him calling out encouragements. With very little instruction, he had quickly learned how to start pedaling the bike from a dead stop on his own without the need for a push from me. But I continued to run behind him nonetheless. It dawned on me that I might be contributing to the very thing I was trying to help him overcome: short-sightedness, or tunnel vision. All of his support was coming from behind him. I had the idea to have him start at one end of the path on his own, and I would be out in front of him at the other end of the path calling out enthusiastic encouragements. This way he would have an inviting target to focus his eyes on. Well, this made all the difference; he rode like a champ!

I learned an important lesson from this experience that relates to simulation. Before true learning or beneficial change can take place, fears need to be addressed and removed. Process simulation is often touted as a way to optimize and improve a system, but one of the greatest benefits can actually be the confidence gained through a well-built simulation. Making changes to a process can lead to wonderful gains in efficiency and revenue. At the same time, changes can also hinder a system and create costly and unforeseen problems. It’s true—you can’t see the future in a simulation model. You can, however, obtain the data and analysis necessary to fearlessly and boldly make informed decisions.

Just like the bicycle, simulation is an invaluable tool that will help you meet your goals. But it will only be useful if there is a reason to learn and a desire to improve. I challenge you to find that reason. Set a goal in front of you, just as my grandson did. With a little work and determination, nothing will stop you from meeting it.

How to Get Better at Simulation while Helping Others

Turns out, one of the best ways to get better at simulation modeling is to give back to your fellow process improvement community members. I recently stumbled on a short post from one of the many “money advice” blogs out there. In it, the author gave an interesting recommendation on how to gain the skills […]

The Big Benefits to Syntax Changes in FlexSim 2017

There are some syntax changes in FlexSim 2017. Here’s a quick summary of the important stuff: We’ve made an enormous, comprehensive update to our FlexScript language. All FlexScript in models created prior to FlexSim 2017 will still execute just fine… as long as your script was correct in the first place! Now that you’re aware […]

How long is eight seconds? That depends on what happens during those eight seconds. When it comes to professional bull riding, eight seconds make all the difference in the world. In today’s Professional Bull Riders (PBR) circuit, a cowboy spends a great deal of time preparing to manage just eight seconds. It’s the amount of […]