FlexSim 2019 is out and ready for download! Import JT files, experience improvements to the A* and People Modules, directly animate 3D shapes with bones, and much more.

Discover the new features and improvements found in the latest version of FlexSim, our flagship 3D simulation modeling software. We’re committed to regularly develop and refine our software, and this version includes updates and improvements to animations, the People Module, the A* Module, data and statistics, and the addition of a JT file importer.

Anyone can download FlexSim a través de su FlexSim Cuenta and try it out under the free Express license. Users with current maintenance can upgrade their license through their FlexSim Account or within the FlexSim software. 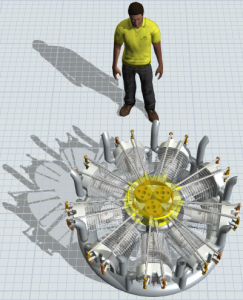 Import 3D model files from CAD software using the JT file format. These files import into FlexSim quickly without having to sacrifice data.

FlexSim has supported bone animations on 3D shapes for a while, but FlexSim 2019 now provides a way to directly animate 3D shapes with bones. Simply enter the animaciones tool for the 3D shape, click the Bone Animations botón, y elija Animate Bones Directly. The bones in the 3D shape will become visible and are now able to be rotated as part of your own custom animations.

Ever wanted to have an operator hold something throughout an animation, like a tool or a clipboard? You now have the option to parent a subcomponent to a bone on a 3D shape within the animaciones tool. All you have to do is use the Sampler to choose the bone that the subcomponent will parent to—it will “stick” there during the animation, moving and even rotating with the bone.

El nuevo Persona Process Flow type adds a few extra features from other types of Process Flows. It automatically creates an “Arrivals” flow where you can set the arrivals for people in your model. These arrivals are automatically connected to the “Person Flow,” where people move through the logic and behaviors you’ve specified in the model. 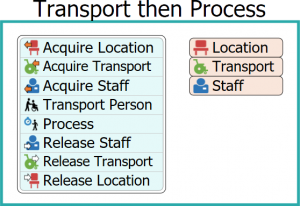 FlexSim 2019 comes with various activity sets to quickly create common groups of activities. Simply drag these templates into the model, hook them into your process logic, and edit as needed. For example, this lets you simply drag out the activity set for Transport then Process instead of having to individually drag out and arrange all the acquire activities, resources, and other elements that are involved. 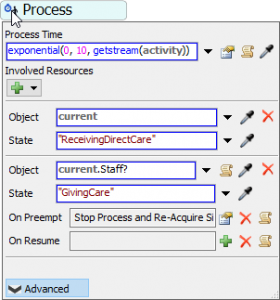 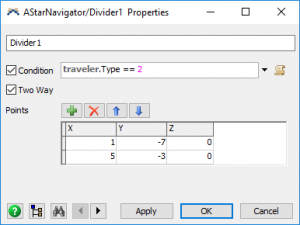 You’ll notice a Condición field in the A* objects’ properties. This gives you the option to have travelers either follow or ignore a path, barrier or divider based on a condition, such as a label.

The barrier object has received a big update—instead of simply being a full-time barrier as before, it can now be partitioned into sections with different directions of allowed travel through each section. For example, you could partition the barrier to only allow travel through a small corridor, or you could have the barrier restrict the flow of traffic to only a northeastern direction.

Dividers and paths can quickly be toggled to be either one-way or two-way. You can find this checkbox in the new Properties window or Quick Properties menu for these objects.

IMPROVEMENTS TO DATA AND CHARTING