FlexSim was recently featured in a Virtual Reality Social Innovation Competition hosted by The Hong Kong Polytechnic University (PolyU). 티he competition aimed to enhance the awareness of the Green Deck proposal among PolyU students and provided an opportunity to create their own models and suggestions using FlexSim’s cutting edge simulation 소프트웨어.

Before presenting, contestants were trained in using FlexSim software and 3D modeling tools by Dr. David Chan and Dr. Walter Fung. They were given the prompt to create a user-friendly virtual design that exhibits a unique 43,000 sq.m. “Green Deck” that can accommodate a wide variety of recreational, cultural, and sports facilities while solving existing problems in the district 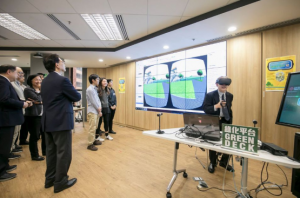 15 different student teams entered the event with their own unique design scenarios that would be judged and evaluated on the following criteria:

A highlight reel of winning entries and photos of the event are available on 유튜브 및 플리커 (Flickr). 자세한 내용은 대회 웹 사이트.

To learn more about the software the students used to create their 3D simulations, check out FlexSim의 G 시리즈 페이지